Can Cyprus's Sacrifice Save the Eurozone? 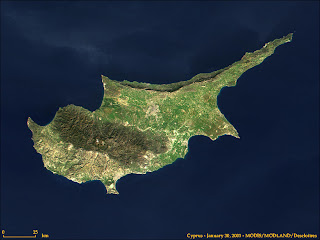 
Cyprus' decision to reject outright the Eurogroup's demands that it tax its bank deposits may have been a slap in the face for Europe but it was also a clear message to the leaders of the eurozone that enough is enough.
The island nation now faces a difficult task in finding a solution that will keep its economy afloat, requiring it to become very creative in order to determine some way of escaping from an impasse that threatens it with economic and political bankruptcy.
Will it be by means of a loan from Russia, convincing the Kremlin to bet blindly on the country's yet to be determined natural gas reserves? Will the government opt to raid some state pension or insurance funds that have already been contributing their share by buying up large sums of national bonds? Will the Europeans back down and ultimately agree to some alternative bailout deal that leaves savings untouched?
The saga began late last week with the shocking revelation that, in order for Cyprus to receive a bailout package of 10 billion euros, its European allies demanded it pony up 5 billion of its own by seizing up to 10 percent of all funds held in its banks. The inability of the Eurogroup to comprehend the longer term consequences of this "one-time" arrangement quickly sent shock waves through the markets, leaving every bank account vulnerable and bringing Europe's economic crisis to the forefront once again.
How could German Finance Minister, Wolfgang Schäuble, fail to see that this decision would inflict still another, perhaps even more serious, blow to Europe's financial credibility? Would it not stand to reason, if accounts in Cyprus could suddenly be taxed overnight, that those of other banks in the troubled southern periphery could just as easily be confiscated? Who could assure the Greeks, Italians, Portuguese and Spaniards that, they too, would not wake up one morning to discover their earnings had vanished?
The Europeans argue that they insisted on this extraordinary haircut in order to diminish the size of the Cypriot banking sector, claiming it to be totally disproportionate to the rest of the economy at five times its gross domestic product. Perhaps they forgot to take mention of the fact that Luxembourg's banks happen to weigh in at a much heftier twenty times GDP.
They also hint at the fact that the measure was one way of dealing with shadowy Russian oligarchs' holdings and other dubious funds that have found their way to Cyprus since the collapse of the Soviet Union and which may represent up to one third of all deposits. Are the Europeans simply unaware that Russians send over $50 billion overseas every year and that much of these funds go to other eurozone members' banks such as those in Austria and the Netherlands?
Tepid excuses aside, the Cypriot situation appears to be nothing other than more brutal punishment inflicted on the countries of Southern Europe by their northern neighbors in their quest for profit. For, who is it that continues to benefit from this persistent so-called European economic crisis? Is it not the Germans who are able to borrow huge sums at negative interest rates, enjoy a booming export sector as a result of a weak euro and dictate the terms and conditions to which all other members must adhere?
The President of the Republic of Cyprus, however, newly-elected Nikos Anastasiadis, was not one to back down, drawing a line in the sand and standing up for his southern brothers. Did he string the Europeans along, all the while knowing that Cyprus' parliament would never pass such humiliating legislation? Did he play them for fools, rejecting the more "acceptable" proposal of little or no tax on smaller sums knowing that Mr. Schäuble would come back, pleading with him to reconsider?
Yes, it appears that Mr. Anastasiadis traveled to Brussels very well aware and very well prepared. In a matter of a few short hours, he was able to heap ridicule on his northern creditors, who, for a trivial 5 billion, showed, once again, a willingness to put greed above the unity of a continent. Time and history will prove just how good a chess player he is and that if his country is the one that dared take on much bigger fish and succeeded in halting the unraveling of the eurozone.
Αναρτήθηκε από Justine's Blog στις 7:22 π.μ.