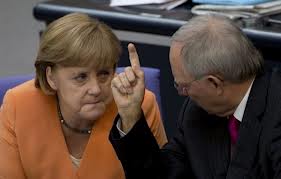 
Dutch Finance Minister Jeroen Dijsselbloem's comments after a painstaking, last-minute bailout deal for Cyprus was reached in the wee hours of Monday morning sent shivers through global financial markets. The recently appointed president of the influential Eurogroup, responding to questions from Reuters' and the Financial Times' correspondents, praised the plan as a template for resolving the area's banking problems and indicated that other eurozone countries could restructure their weak financial institutions along similar lines.
With this striking turn of events, it appears that Germany and its northern allies have, once again, forced a new set of humiliating rules on their troubled southern European partners. Using Cyprus as a scapegoat, the Germans have brought the whole banking sector in the periphery to its knees by demanding that uninsured depositors bear the brunt of any bank recapitalization.
Thus, as shocked major account holders in Cyprus' second largest lender, Laiki Bank, witness the disappearance of a chunk of their savings, the island nation's European neighbors must be terrified as to when they will have a restructuring imposed on them under the threat of bankruptcy and exit from the euro.
There can be no doubt that the Germans' insistence on such brutal terms was an act neither simple nor random in nature. Fundamentally changing the rules under which economies operate across the continent by requiring that insolvent banks be rescued by their major clients, depositors will now be recognized as investors who must assume risk in order to hand over their savings. As such, what wealthy entity, be it a large corporation or fund, for example, would dare hold its assets anywhere but in the safe lands of the north?
Germany has benefited enormously from its European experiment. With nearly two-thirds of its exports going to the eurozone, its economy has flourished with very low unemployment and steady growth. However, once the weaker members, having spent recklessly acquiring all the Germans had to offer, come calling for assistance, they are greeted with demands of savage cutbacks.
For, from the outset, Angela Merkel was adamantly unwilling to use the tools at her disposal to improve the lot of those in need. She refused to issue so-called "eurobonds" to pool the debt of the 17 eurozone states and rejected the notion of the European Central Bank acting as "lender of last resort," measures that would serve to significantly bring down the cost of servicing the struggling members' debt.
She fought against big increases in the size of the European Stability Mechanism, leaving it far short of the required funds should Italy or Spain find themselves unable to borrow on the open market. She called for the implementation of endless austerity in Greece, slashing wages and pensions and raising taxes, knowing full well that such measures during difficult times can only have tragic consequences.
By fomenting this never-ending economic crisis, Germany is able to provide a weak euro to keep its heavy industries humming and to borrow at negative real interest rates, allowing it to save at least 15 billion euros in interest costs over 10 years according to a study by the Kiel Institute.
Not ones to stop while ahead, it seems that the Germans have found a new weapon to add to their arsenal. With their southern partners' economies collapse resulting in these nations being unable to purchase many imported goods, Germany has decided to pursue the only assets left to be had, namely the funds remaining in their banks.
By extorting billions from Cyprus, shutting down the Cypriot "offshore" economic model and exposing all the perimeter nations' depositors to huge potential losses, they are forcing all the monies in the eurozone northward.
Wars can be fought on the ground in the trenches and through the air with fighter planes but this occupation has taken on the color of money!
Αναρτήθηκε από Justine's Blog στις 6:13 μ.μ.