Cyprus on the brink of bankruptcy? 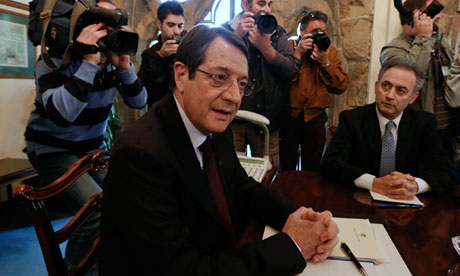 Nicos Anastasiades enters talks in Brussels faced with the threat that the ECB will cut off a funding lifeline if there is no rescue deal. Photograph: Yorgos Karahalis/Reuters


The Cypriot president is expected in a snow-bound Brussels later on Sunday for a showdown with European governments and the International Monetary Fund that is likely to determine whether the island, teetering on the brink of insolvency, becomes the first country to be kicked out of Europe's single currency.

Nicos Anastasiades is to see Christine Lagarde of the IMF and Mario Draghi, head of the European Central Bank, as well as the presidents of the European commission and European council, Jose Manuel Barroso and Herman Van Rompuy, who have cancelled an EU-Japan summit to return to Brussels because of the Cyprus emergency.

Anastasiades is expected to unveil new proposals to hit wealthy Cyprus banking clients with heavy levies on their deposits in order to come up with about one-third of the €17bn bailout the country needs.

A week ago he insisted on minimising the levy to less than 10% to prevent foreign investors, mainly Russians and British, pulling their money out of Cyprus. Now he is being forced to double that levy to 20%, according to reports from Nicosia late on Saturday, while sparing all savers with less than €100,000.

With the stakes never so high for Cyprus, the European Central Bank is threatening to pull the plug on short-term funds propping up the Cypriot financial sector on Monday unless a last-minute deal is struck that satisfies the island's increasingly hawkish eurozone creditors, led by Germany.

The eurozone's biggest economy is determined that the island deflates a bloated financial sector that exceeds the size of the Cypriot economy by a factor of eight.

"It is well-known that I won't allow myself to be blackmailed, by no one or nothing," said the German finance minister, Wolfgang Schäuble. "I'm aware of my responsibility for the stability of the euro. If we take the wrong decisions, we'll be doing the euro a great misservice," he told a German Sunday newspaper.

Anastasiades's meetings in Brussels will be followed by an emergency meeting of eurozone finance ministers in the eurogroup on Sunday evening. It will also be attended by Lagarde, the European commissioner Olli Rehn and top officials from the European Central Bank – which will be the crucial venue for striking a deal.

In talks on Saturday in Nicosia with the "troika" of EU, ECB and IMF officials, according to Reuters, Anastasiades conceded a much bigger confiscation of wealthy depositors' cash. Anyone with more than €100,000 in Bank of Cyprus, the country's biggest bank, would lose 20%, while similar deposits in other banks would be hit by a 4% levy.

The proposed deal would still need to pass the Cypriot parliament, which last Tuesday unanimously rejected an agreement to tax savers. The parliament is expected to convene quickly if the Cypriots and the eurogroup reach agreement on Sunday evening.

"There are only hard choices left," said Rehn.

"We are undertaking great efforts. I hope we have a solution soon," Anastasiades tweeted.

Schäuble said Cyprus could not avoid very tough times. "But that is not because of European stubbornness, but because of a business model that no longer functions," he said.

The eurozone's terms for an agreement could not be changed, he added, also insisting that depositors with savings under €100,000 had to be spared.

A senior policymaker at the ECB also served Cyprus notice that it would be given little leeway in the crucial talks by predicting that the island's financial woes would not tip its eurozone peers into economic crisis.

Ewald Nowotny, the head of Austria's central bank, echoed the view of his German counterparts in an interview this weekend, warning that the Cypriot economic model – with its reliance on offshore banking and Russian money – was unsustainable.

"This system is certainly no longer able to continue," said Nowotny.


Speaking in an interview with the Austrian newspaper Österreich, Nowotny indicated that failure to agree a deal by Monday's deadline – when the ECB has threatened to cut off financial assistance to Cyprus – would not trigger a systemic crisis across the eurozone.

"We see clear signs of improvement in Spain, Portugal and Ireland. I see no massive economic problems in Italy as well, so I do not believe that it will come to contagion," he said, reiterating that Cyprus accounts for only 0.2% of eurozone GDP. Nowotny also ruled out the prospect of the Cypriot depositors' haircut being implemented on Austrian savers. "Austrian savers' money is absolutely safe," he said.

The original rescue deal for Cyprus collapsed last week when legislators rejected proposals that included a levy of 6.75% on all deposits below €100,000. Observers have warned that the haircut has damaged public trust in the euro project, because deposits under €100,000 are protected across the European Union.

Cypriot banks hold €68bn in deposits, including €38bn in accounts of more than €100,000. With so much of the Cypriot banking system predicated on deposits rather than wholesale debt funding, officials at the IMF, the ECB and the EU have told the Cypriot government that depositors must carry some of the pain of a bailout, or risk their savings being wiped out altogether.
Αναρτήθηκε από Justine's Blog στις 5:38 π.μ.