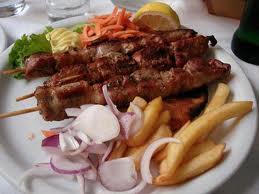 The Greek restaurant owners in Quebec are an extremely lucky lot given the fact that their ever-popular souvlaki has a legitimate French translation. Called "brochette" and served in countless "brochetteries" all around Canada's French-speaking province, the Greeks have avoided the fate that has befallen their Italian confreres. There is, to this day, no ''souvlakigate'' of which to speak of.
Recently, the Office Québécois de la Langue Francaise or Quebec Board of the French Language, a government body charged with the task of policing the use of Quebec's official language, sent a letter to a renowned Italian eatery in Montreal informing the owners that they were in violation of the law by daring to use the words 'pasta,' 'polpete' and 'bottiglia' on the menu instead of their French equivalents.
'Pastagate,' as it has come to be known, has made its share of the world's news headlines and become a major embarrassment to the minority Parti Québécois government of Pauline Marois, forcing it to call its language inspectors to task and to ouster the Office's president, Louise Marchand.
It should be noted that Quebec's language laws are very strict, pervading all aspects of the province's society and clearly stating that French must be dominant, be it on restaurant menus or anywhere else. On external signage over buildings and businesses, for example, English is permitted only if the lettering used is half the size of the corresponding French characters whereas legal documents may be prepared in English only if expressly requested by the parties concerned.
The recently elected government, in its zeal to placate its more radical wing and maintain the unity of the party base, began its term by attempting to play up its defence of the French language, sending its 'language police' into the streets to seek out violators that refuse to comply with the law. The tactic has backfired, however, making the government the brunt of ridicule and the darling of cartoonists everywhere, where its officers are no longer portrayed as sporting rulers to measure letter sizes but, rather, as perplexed inbeciles rifling through dictionaries in the quest for translations of words such as 'pasta.'
Undaunted, however, the Marois government has attempted to introduce legislation to further strengthen the Charter of the French Language in the form of Bill 14. This highly controversial measure that appears to have little chance of becoming law, calls for, among others:
1) the designation of a minister responsible for language matters;
2) that educational institutions take steps to ensure students receive sufficient training in French to prepare them to flourish in Quebec society;
3) that small businesses employing between 26 and 49 employees make French the language of the workplace;
4) that businesses that serve the public communicate with customers in French;
5) that the bilingual status of numerous municipalities be revoked;
All this, in an effort to 'strengthen' a Charter that already proclaims that:
1) French is the official language of Quebec and a "fundamental factor of its social cohesion;"
2) every person has a right to live and receive an education and work in French in Quebec;
3) immigrants to Quebec have a right to learn French and to benefit from reasonable measures to facilitate their integration.
Not surprisingly, these developments have irked the ire of the Anglophone and Allophone communities who see these initiatives as fresh attempts to infringe on their rights as equal citizens and who have launched a petition that has already garnered over 20,000 signatures in a drive to have Bill 14 never see the light of day.
The Parti Québécois government may have only been in power for a very short period of time, however, it appears that the nine long years it spent slumped in the opposition benches have taught it little. For, instead of trying to promote the beauty of the French language through the channels of art and culture, it attempts to impose its dominance by limiting that of any other. And, rather than funding a worthy and dynamic Francophone education, it resorts to legislation to impede its citizens from attending schooling in the language of their choice.
All this is turning the "Francophonie" that is Quebec into a "Francophobie" and may well end up, once again, causing the best to leave the province in their quest for a brighter future elsewhere in Canada. Already, the first signs are appearing with last month's employment figures showing that the country as a whole generated a very strong 50,700 new hires while Quebec, on the other hand, had a large drop, shedding 11,300 jobs.
The government continues to believe that it must use the language card to enhance its popularity with the predominantly Francophone electorate in order to cling to power. The right approach, however, is one which builds on the province's French character, emphasizing its strengths and uniqueness, rather than attempting to legislate all else into extinction.
As for "souvlakigate" or "pastagate," these are policy blunders that can only result in international ridicule and lampooning.
Αναρτήθηκε από Justine's Blog στις 6:45 π.μ.