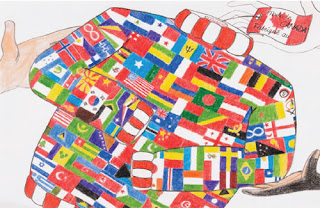 
An article titled "Multiculturalism's An Outdated Insult" recently appeared concurrently in Toronto's English-language newspaper, The Globe and Mail, as well as in Montreal's French-language daily, La Presse. Penned by Leo Housakos, a Canadian Senator of Greek descent, the item brought the ever-controversial issue of multiculturalism in Canada into the spotlight once again.
In his discourse, Mr. Housakos accuses successive Canadian governments, both Liberal and Conservative alike, that the approach they have taken with respect to multiculturalism over the last 50 years "is a political strategy to buy ethnic votes that has become a state-financed marketing program."
He notes, that despite good intentions, "although we Conservatives refer to it as "outreach" to the ethnic communities, I'm afraid we're continuing the Liberals' policy of profiling Canadians based on race, colour and religion."
Appointed by current Conservative Prime Minister Stephen Harper to the upper house of Canada's Parliament in 2008, Senator Housakos, an integral part of Montreal's Greek community for many years, surprisingly denounces multiculturalism as a "political marginalizing of ethnic communities."
Is this a valid argument? Does the concept truly relegate ethnic communities to second-class status or is multiculturalism the vehicle they can use to better intregrate into the large mosaic that is Canadian society?
To fully understand it, multiculturalism must be looked at from its beginnings in 1971 when Liberal Prime Minister Pierre Trudeau proclaimed it a national policy of the country and declared that Canada would recognize and respect its society, including its diversity in languages, customs, religions and so on.
In 1982, Trudeau would go on to repatriate the Canadian constitution from Great Britain and formalize a Canadian Charter of Rights and Freedoms, entrenching multiculturalism therein under section 27.
Six years later, in 1988, Conservative Brian Mulroney would bring into law the Canadian Multiculturalism Act, affirming that his government would ensure that every Canadian receives equal treatment and that it would respect and celebrate diversity. In the Act, the government also pledges to recognize:
1) Canada's multicultural heritage and to ensure this heritage is protected;
2) aboriginal rights;
3) English and French as the official languages but that other languages may be used;
4) equality rights regardless of colour, religion or otherwise;
5) minorities' rights to enjoy their cultures.
There can be no doubt that the forward-looking Pierre Trudeau took a landmark step, perhaps the most important, in unifying Canada's diverse population. In the vast, far-flung country, spread between an English-speaking majority, a significant French-speaking minority, numerous aboriginal Indian tribes and a large immigrant population, Trudeau knew full well that there could be no room for a "Canadianization" along the lines of the "melting pot" example set by the United States.
Historically, Canada's attempts at assimilation, given its large French populace that comprises one-quarter of the country, were abandoned long ago with the implementation of the Quebec Act in 1774 granting quasi-equal status rights to the French-speaking community.
Ever since, Canada has been known as a nation that welcomes all ethnic communities. Instead of alienating the immigrants, Trudeau, among others, encouraged them to use their native languages and promote their cultures, thereby enabling them to maintain their ethnic identity.
As such, the policy of multiculturalism has become a basis for facilitating the integration of all newcomers into the Canadian fabric. For example, the government assists ethnic groups with the building of their community centers, schools and nursing homes, thereby, in effect, sponsoring places which are used to celebrate their diverse cultures.
How can these be considered initiatives that marginalize, stigmatize or isolate ethnic Canadians? On the contrary, these must be commended as measures that respect the roots and background of everyone and should be looked upon as attempts to open all to the great opportunities afforded by this vibrant nation.
Having immigrated to Francophone Montreal some 24 years ago and having lived and worked alongside its large Anglophone and multi-ethnic components, I have witnessed multiculturalism at its best. Be it through support for the Jewish Segal Theatre, the DaVinci Italian Cultural Centre or the Hellenic Studies Chair at McGill University, multiculturalism enables Montreal to bask in the glow of its multi-ethnic richness.
Perhaps Senator Leo Housakos, who believes that being called a Greek-Canadian is an insult, should revisit the issue once more before transmitting a virus of ethnophobia to coming generations!
Αναρτήθηκε από Justine's Blog στις 4:48 π.μ.